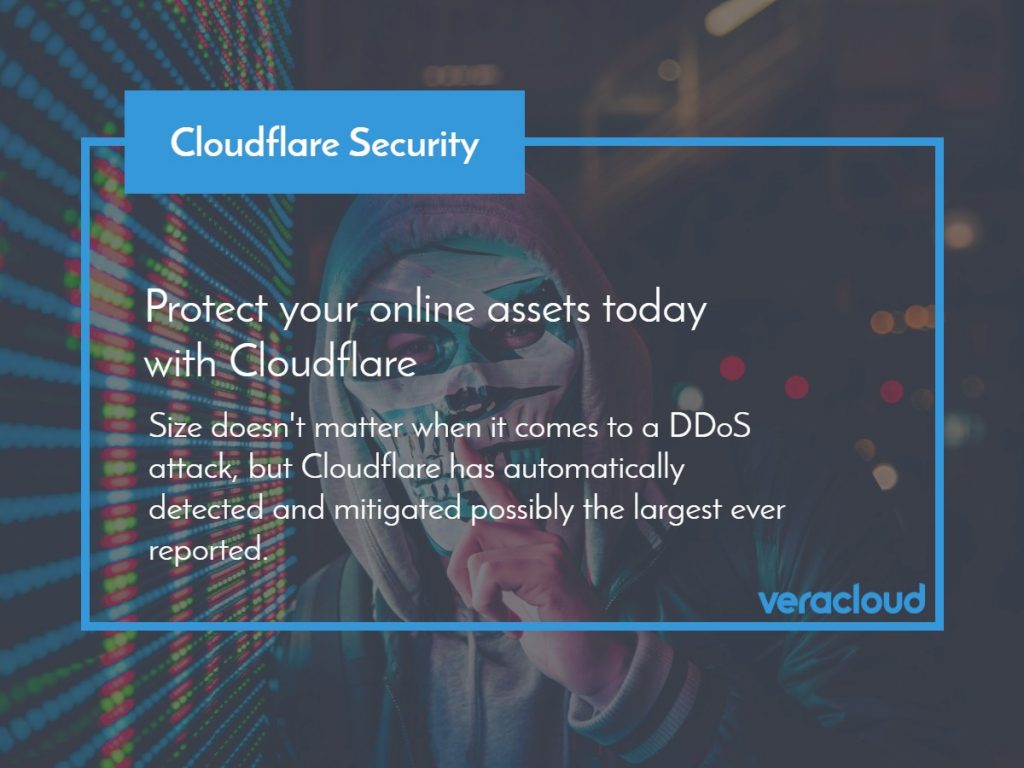 With an ever-increasing reliance on and demand for online services, every business must be online in today’s digital age to survive. Whether for internal corporate use or for providing customers with a service, the risks of an attack are great, great enough to bring your entire business to its knees, causing irreparable damage to your reputation and customer base. Cloudflare to the rescue.

Cloudflare has recently pulled off nothing short of a security wonder – automatically detecting and mitigating possibly the largest ever Distributed Denial of Service (DDoS) attack. What is a DDoS attack? Simply put, it is a malicious attempt by hackers to disrupt the typical traffic received by a server, service, or network. An overwhelming amount of traffic is sent to this target to flood it with internet traffic.

In terms of internet traffic, with a typical 800-1000 requests per second…that’s huge! However, thanks to the reliability of their global scale network, Cloudflare not only managed to mitigate this attack, but did so without requiring any manual intervention by their security engineers and without degrading performance.

Although DDoS attacks are increasing in power, a business does not need to experience a large-scale attack as the one above. According to Cisco’s Internet Report the average DDoS attack size is a 1 Gbps attack that is more than enough to take most organisations completely offline. If you believe that your business is too small to suffer an attack, think again! Small businesses are typically the preferred targets due to the lack of defences in place. Numbers show that cyber criminals target up to 43% of their attacks on small business, with only 14% of businesses prepared to take precautions. With an average cost of an attack on a business of over €150,000, 60% of businesses that have been a victim, close shop within 6 months.

Following Veracloud’s partnership with Cloudflare, we assist companies in creating a trustworthy digital environment to bring the level of security required by all businesses, small or large. Protect your online assets today before it’s too late. Reach out now and learn how Veracloud can assist your company with securing your online business presence!

Check out the latest events and articles from Veracloud. Here you’ll get the details on all the latest buzz on our Company or Technology. Explore our blog to find the information you need.

Read More
X
We use cookies to ensure that we give you the best experience on our website. If you continue to use this site we will assume that you are happy with it.I ConsentPrivacy policy